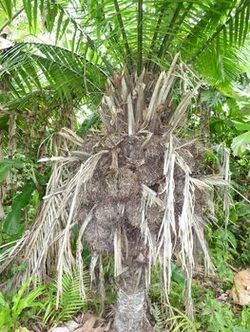 Tagua is a form of vegetable ivory harvested from ivory palms in South America. It is viewed as a sustainable alternative to ivory derived from animals, and responsible cultivation and harvesting of tagua may also help with rain forest conservation in South America. Like true ivory, tagua is dense and creamy yellow in color, and it can be carved and worked into buttons, traditional handicrafs, billiard balls, musical instrument parts, and other things traditionally made from ivory.

The formal name for the South American ivory palm is Phytelephas aequatorialis, and the palms thrive between Paraguay and Panama. A full-grown tagua tree can reach 65 feet (20 meters) in height, and will yield several very large, knobbly wooden fruits. When the fruit is cracked open, it reveals several hen's egg sized tagua nuts, the seeds of the tree. The tagua seeds can be allowed to grow into seedlings to perpetuate the trees, or carved into vegetable ivory products. In small South American communities, tagua can provide a valuable economic and cultural service by providing people with a source of income which allows them to live traditional lifestyles.

The tagua began to be exploited in colonial times when the Spanish settled on the American continent. Since the very first contact of the foreigners with the plant, the tagua nut was used for making buttons, umbrella and walking stick handles, napkin holders, combs, chess pieces, piano keys, letter openers, and other utensils. Centuries later, the invention of plastics did away with the popularity of tagua. And high quality items began to be made from animal ivory.
In South America, several rain forest preservation initiatives have taken advantage of the economic value of tagua. Cultivation of the trees and sustainable harvesting is encouraged; in many places, tagua is grown in a rain forest environment, rather than a plantation, and the seeds are harvested naturally as they fall to the ground, so that the tree is not traumatized by climbing. This allows the tagua trees to provide valuable habitat to rain forest animals, and also assists with rain forest preservation, because the rain forest is more valuable standing than it is cut down. Keeping the rain forest intact allows scientists to explore it, cataloging new plant and animal species and finding other plants with potential economic, medical, and decorative uses for humans.

Like other forms of vegetable ivory, tagua is virtually indistinguishable from true ivory. People who are concerned about elephants also support tagua plantations, in the hope that vegetable ivory can totally replace elephant ivory. While elephants have been dangerously over hunted, tagua thrives through much of South America, and is also considered a renewable resource because the tree does not need to be killed to access the ivory. Thus, tagua can serve a two part function: helping to save the incredibly rare and diverse rain forest environment, and assisting with elephant conservation.